A potential new tourism tax for Wales has divided the holiday industry. News that the Welsh Government has commissioned research into the impact of the tax has led to heated debate.

Supporters of the scheme see it as a useful way of collecting more money for the local area’s infrastructure. However, critics argue visitors won’t pay higher prices – particularly in the current economic climate. There are fears a tourism tax will kill the current trend for staycations. 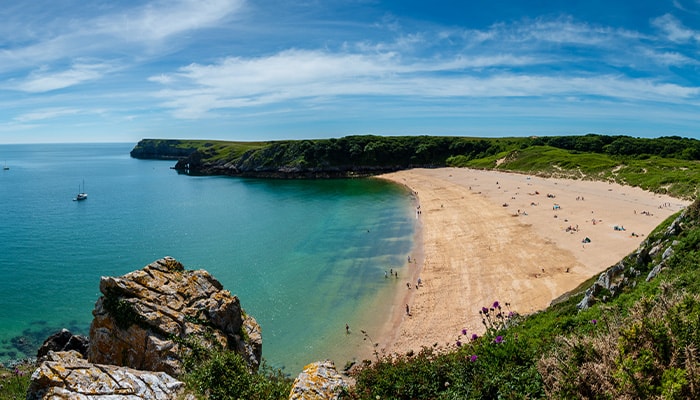 According to research, 45% of Brits are planning a staycation this summer to save money, with more than 30 million holidaymakers staying in the UK. Accommodation providers fear if they have to increase their prices to include the new tax, tourists might decide it’s cheaper to go abroad.

What is tourism tax?

Tourism tax is levied on areas where there are a lot of visitors, to the point of over-tourism having a negative impact on the locals. It is a fee levied through holiday companies or accommodation providers – it means visitors will pay more for their holiday home.

Popular destinations in Britain and mainland Europe have introduced the tax recently such as Edinburgh, Austria, Amsterdam, Belgium, Portugal, Venice and many more. The funds raised will counter some of the negative effects on the local infrastructure caused by a high volume of tourism.

For landlords of holiday lets, it will mean local authorities can impose a levy on their visitors for nights spent in accommodation including bed and breakfasts, hotels and self-catering holiday lets. The landlord won’t directly receive the money, as it will be paid to the local authority.

Critics have called the tax “anti-English” and say it will deter people from the other home nations from staying in Wales. There are also concerns about the impact on Welsh people, as they too will face higher prices when booking holiday accommodation.

Why is the Welsh government considering it?

Despite concerns, Labour and Plaid Cymru are pressing ahead with plans for a consultation exercise later this year. The tourism industry makes a significant economic contribution to Wales, estimated to be more than £5 billion annually.

However, the massive influx of visitors puts a strain on the infrastructure of local communities. This can be detrimental to the quality of life of local residents.

The Welsh government is planning to launch its consultation this autumn. The finance and local government minister, Rebecca Evans, has approved funding for three separate research projects into introducing the tourism levy.

They will research the economic impact of the tax across Wales and provide an overview of how similar tax systems in other tourism regions across the world have worked. There will also be an analysis of the demographics of the Welsh tourism sector.

How will it affect those living in Wales?

Jim Jones, the North Wales Tourism chief executive, has been outspoken in his criticism of the scheme, calling it “staggering” that the Welsh government is even talking about it.

People in the UK are still trying to recover from the economic impact of the coronavirus pandemic. In addition, utility bills have reached record highs, the inflation rate is soaring, and the increased cost of a supermarket shop has left many people in poverty.

Mr Jones said the tax on tourism would be a “hugely regressive step”. Rather than helping the Welsh population, it would damage an industry already struggling to recover from two years of hardship.

Suzy Davies, the chair of Wales Tourism Alliance, echoed his words. She said the tax on tourism would go against the “Welcome to Wales” message that is aimed at attracting visitors. The prospect of a 20% VAT rate, combined with an additional tourism tax, was bad news for tourism in Wales and Britain as a whole, she added.

How will it affect tourists?

Backing the scheme, Rebecca Evans said a levy on visitors was common in international tourist hotspots. The idea behind the tax was to give visitors a chance to make an investment in the local services and infrastructure. This in turn would make tourism more successful, she added.

Supporters of the tax say local communities are currently facing an “undue burden” of funding facilities that are largely frequented by visitors. Everything from toilets to carparks is currently paid for by local ratepayers, but holidaymakers take over in the summer, to the detriment of residents.

The extra cost shouldered by visitors varies from country to country. For example, in Amsterdam, visitors pay an extra three euros – around £2.55 – per person per night, with an additional 7% city tax payable, based on the room price.

If a similar scenario was introduced in Wales, based on a family of four staying for seven nights, the cost of the holiday would include an extra £71 tourism tax, plus another 7% on top of that, depending on the cost of the tariff.

How has it affected countries abroad?

Little research has been carried out into how the tourism tax is affecting visitor numbers. However, the results of a study in the Maldives, published in November 2021, reveal the number of visitors has decreased since the levy was introduced.

On average, a tourism tax of 10% causes the number of visitors to decrease by 5.4%. However, in the Maldives, the tax is seen as vital to the economy and has been viewed as a positive step. As the nation is heavily dependent on tourism as its primary industry, 70% of government revenue now comes from the tourism tax.

The study, published in the Journal of Travel Research, shows that visitors from the UK, China, Italy and France have generally responded negatively to the price hike due to the tax. However, visitors from Germany and the United States haven’t let it affect their plans.

How will this tax affect holiday lets?

If the tax is imposed on second homes and holiday homes, industry leaders believe many Welsh holiday cottages will be lost. The owners of self-catering holiday accommodation say they are “fearing the worst” if the new regime is introduced. Some feel they will have to close.

At Dan Yr Ogof’s National Showcaves Centre for Wales, the 20 self-catering properties could suffer “serious economic damage” if the proposal came into force, according to Ashford Price, Showcaves’ chairman. He claimed the plan was “anti-English” and said Wales would lose too many tourists to self-catering accommodation in England and Scotland if the costs in Wales increased.

In a poll of visitors to Wales in April this year, the vast majority felt the tax was a bad idea. Respondents described it as “utter madness”, “short-sighted” and “crazy”. Some said the tax would render their annual holiday “uneconomic”, as their finances were already stretched to capacity.

Some think that the government’s way of thinking is all wrong. Other UK holiday destinations, including Devon and Cornwall, rely heavily on tourism. It’s what keeps these counties afloat.

Holiday makers already contribute enormously to local economies, simply by being there and supporting regional trades and businesses. Without them, these places would struggle. The tax would not improve the lives of local residents, because their bread and butter would have been snatched away from them.